This article develops an algorithm for the detection and recognition of regulatory traffic signs of Ecuador, under extreme lighting conditions in the visible spectrum. The method consists of the following steps, i) video stabilization to reduce vertical oscilation, ii) location of the regions of interest based on color over the RBG-normalized and HSV spaces,
iii) implementation of a two-stage multiclassification algorithm, based on Extreme Learning Machine (ELM) and the HOG descriptor, to classify by form and content. The experimental results of the recognition stage were developed on a database of regulatory traffic signs of Ecuador. This dataset is with more than
47000 images of Ecuadorian road signs over 16 classes, which are used to obtain an accuracy of 99.85 %, and a sensitivity of 99.78 %, in the first stage, followed by an accuracy of 96.71 %, and a sensitivity of 94.16 % for the second stage. In addition, its robustness was verified when compared with other classifiers,
being the one with the shortest processing time, i.e. a trade-off between accuracy and computational speed is obtained.
Finally, the traffic sign detection system works at 24 frames per second, and was tested in real driving conditions in several Ecuadorian cities, during the day. 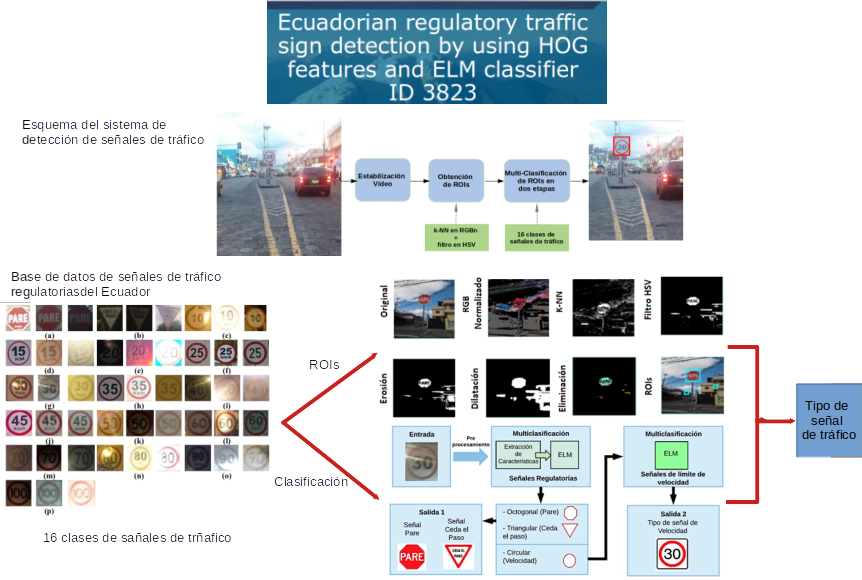